Why GameStop Shares Are Going Parabolic This Week

Will the Retail Wreck Continue?

Will the Retail Wreck Continue?

Shares of the original meme stock are doing the meme stock thing again this week. The stock of GameStop (NYSE: GME) had rocketed more than 50% above last Friday’s closing price at the high point this week. While the stock retreated from the peak, heading into the final day of this week’s trading, GameStop shares were still up more than 35%, according to data provided by S&P Global Market Intelligence.

While GameStop did announce some news on its move into digital assets this week, it’s more likely that the spike in the share price is more related to retail investors who drove its shares to lofty heights when the meme stock craze began more than a year ago. Investors have been increasing the number of short positions in GameStop all year, and they may be experiencing a short squeeze with first-quarter earnings on deck next week.

As the year has progressed, the number of GameStop shares sold short has been steadily increasing. Retail investors on social media are likely trying to predict when those short sellers will cover their shares, creating a short squeeze. Indeed, this week’s move might even be the transition as those sold shares are being bought. 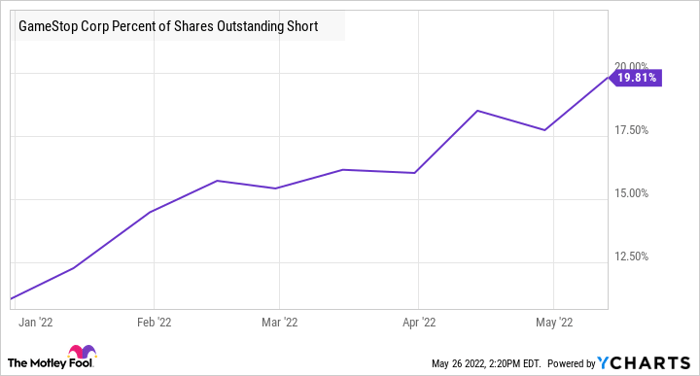 The retail investing crowd is also happy to see the company begin its transition away from its slowing brick-and-mortar video game business. Earlier this week, GameStop announced it launched a digital wallet “to allow gamers and others to store, send, receive and use cryptocurrencies and non-fungible tokens (NFTs).

It’s a step the company previously signaled as a way to move past its legacy video game business. But it’s unlikely that this move forced the surge in shares this week. If retail investors are driving the move, or a trader-induced short squeeze is under way, the move won’t be anything investors want to take part in as it will likely be short-lived.