Exelixis (NASDAQ: EXEL) and CRISPR Therapeutics (NASDAQ: CRSP) have been able to parlay their specialized knowledge of genetic therapies into share-price growth. While the Fidelity Select Biotech ETF is down more than 22% for the year, these two biotechs have been able to buck that downward trend. Let’s see what these two biotechs have going for them that is so encouraging to investors.

Exelixis is a biotech that focuses on genetic therapies to fight difficult-to-treat cancers. Its shares are up more than 19% so far this year because the company’s financials, buoyed by its cabozantinib franchise, have seen strong improvements. On top of that, Exelixis has several late-stage therapies that could expand the applications for its four commercial products: Cabometyx and Cometriq (cabozantinib), Cotellic (cobimetinib) and Minnebro (esaxerenone).

Much of that growth stemmed, the company said, from the Food and Drug Administration’s January 2021 approval of Cabometyx in combination with Opdivo as a first-line treatment for patients with advanced renal cell carcinoma (RCC), a type of kidney cancer.

The prospects for increased revenue from Cabometyx are strong, as Exelixis just this month reported positive phase 3 trial data for Cabometyx, used in conjunction with nivolumab and ipilimumab, to treat patients with previously untreated advanced intermediate or poor risk kidney cancer. It also recently announced positive phase 2 trials for Cabometyx as a combination therapy with pembrolizumab to treat recurrent or metastatic head and neck cancer that stems from squamous cells.

The company also sees strong potential for XL092, an oral tyrosine kinase inhibitor that has the potential to be a therapy against several solid-tumor cancers. Late last month, Exelixis began a phase 3 trial for XL092 as a combination therapy with atezolizumab to fight colon cancer.

CRISPR Therapeutics, which focuses on gene-editing therapies using the CRISPR/Cas-9 gene-editing method, has seen its stock rise more than 10% this year. The company’s therapies have the potential to functionally cure diseases that are currently only managed at best.

CRISPR reported only $200,000 of collaboration revenue in the first quarter. The key for the company, however, is it has $2.2 billion in cash, which should be enough to get its growing pipeline over the finish line. 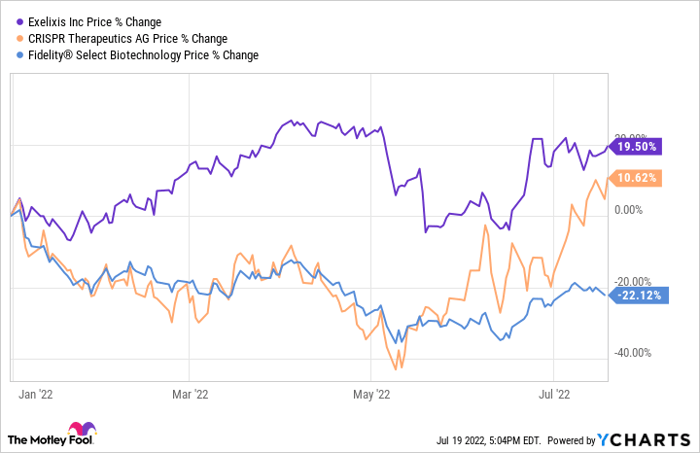 Though both stocks are biotech companies that deal with gene-editing therapies, that’s about it for their similarities. Exelixis is already profitable and looks as if it’s about to become even more so, once its treatments in late-stage trials go to market. Other investors have already seen the potential, but there’s still room for the stock to climb further if the FDA approves more applications for Cabometyx or gives XL092 its first approval.

There’s a bit more risk with CRISPR Therapeutics because it isn’t profitable yet. However, the potential is so great that many long-term investors are willing to take a risk on its revolutionary therapies.