Thanksgiving is usually a $250 million box office haul. This weekend it will be hard to reach $20 million

Value investors have been challenged over the past decade, with many value strategies lagging a broad market index. The average fund in the large-value Morningstar Category underperformed the Russell 1000 Index by 4.3 percentage points annually over the trailing 10 years through May 2020.

Despite the recent performance drought, the long-term track record of value-oriented strategies and their underlying economic logic provide compelling reasons to stay the course. Stock prices and expected returns are linked, with lower prices translating into higher discount rates and higher expected returns. All else equal, lower prices should allow an investor’s dollar to go further.

But value investing has always been and likely always will be difficult because practitioners are betting against the market. If the intrinsic value of a business is the present value of its future cash flows, they’re wagering that the market has underestimated the magnitude of those cash flows or that it has excessively discounted them. In either case, value investors claim that the underlying business is worth more than the market’s price.

Betting that the market has mispriced a stock is a risky proposition. Forecasting future cash flows and discount rates is wrought with uncertainty because the future is unknowable. As we rang in the new year, few would have guessed that a virus outbreak in China would rapidly spread around the world and slow the global economy to a crawl, spurning the near-term earnings of many businesses.

Unexpected circumstances like these throw a wrench into the cash flow generating machinery of businesses, making it difficult if not impossible to forecast what they will be worth in the future. This is a task that has proved difficult for some of the greatest investors to pull off even once in a while, let alone consistently. Their experiences impart some important lessons.

Even the Oracle Gets It WrongOne of Warren Buffett’s early business deals illustrates the perils that come from betting against the market. In 1975, he acquired New England textile manufacturer Waumbec Mills at a rock-bottom price. Waumbec’s operations also complemented Berkshire Hathaway’s existing textile production, offering the potential for efficiency improvements. On the surface, there wasn’t much to dislike about the deal.

But Waumbec Mills was cheap for a reason. Beneath the attractive sticker price sat a beleaguered company in a deteriorating industry. Prior to the acquisition, Waumbec had operated at a loss, with the factory functioning at about half its capacity. And while it was difficult to see at the time, U.S. textile manufacturing would be all but extinct within the next decade.

An extraordinary effort by Buffett and his team helped Waumbec become profitable, though the result didn’t quite live up to his initial expectations. While the investment netted a small gain, the lost opportunities proved costly: The time and money spent attempting to turn Waumbec Mills around couldn’t be deployed on more-lucrative deals or acquisitions.

More Than Low PricesBuffett’s proselytism—shifting his preference to good businesses purchased at fair prices—is more than a folksy one-liner. Intuitively, good businesses with strong profits should have the ability to reinvest in their operations, further growing future profits and cash flows.

There is strong empirical evidence to support the argument for investing in high-quality, profitable businesses. In his paper “The Other Side of Value,” Robert Novy-Marx demonstrated that highly profitable companies outperform their less-profitable counterparts.[2] Current profitability has proved to be a decent predictor of future profitability.

Yet more-profitable companies tend to trade at higher valuations than less-profitable companies. That relationship is apparent in fund-level data. Exhibit 1 plots the price/book ratio of open-end mutual funds and ETFs in the large-value category against their profitability (measured by return on invested capital). 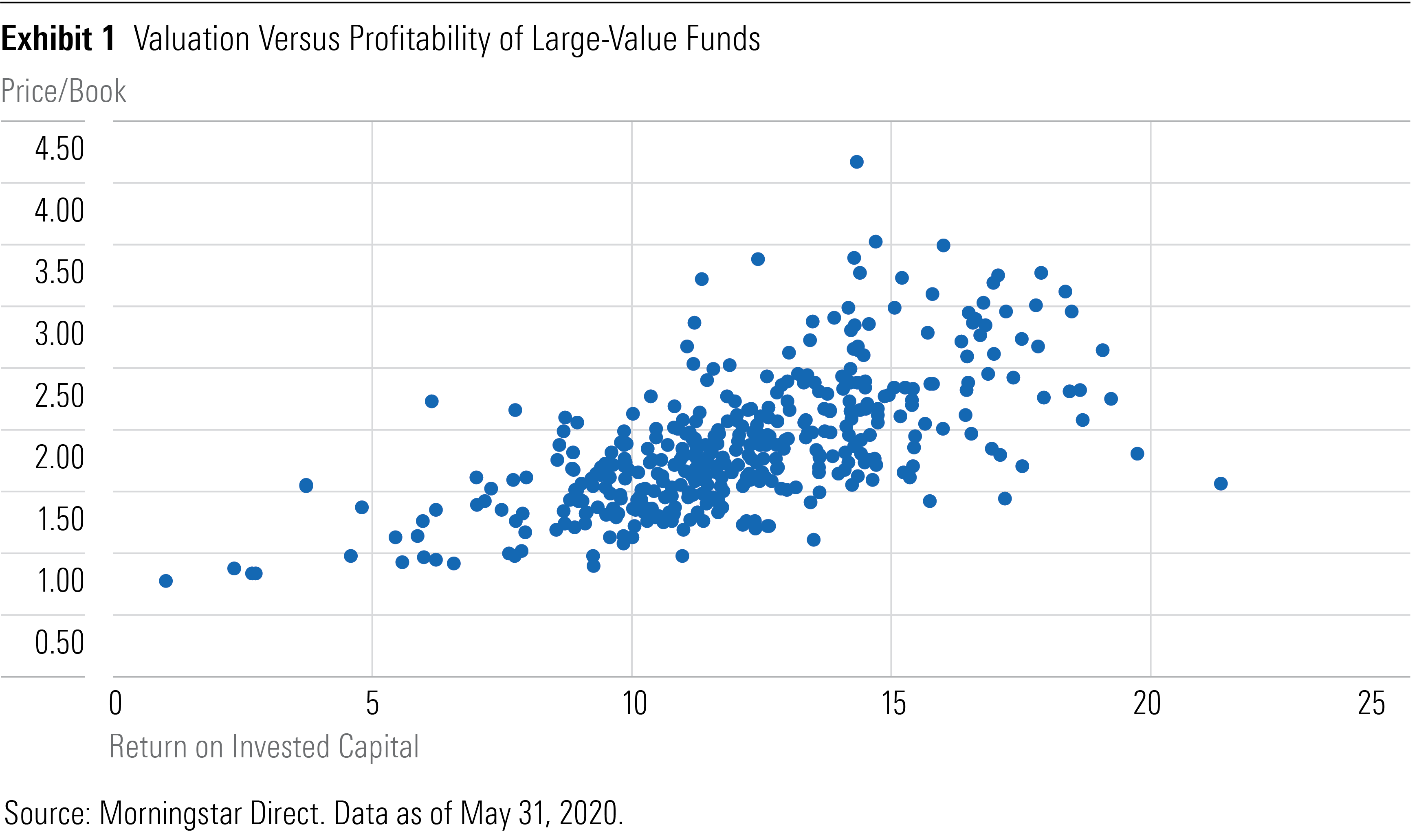 The matrix in Exhibit 2 was compiled using data from the Ken French data library. It sorts the historical performance of U.S. stocks by their price/book ratio and operating profitability. At a high level, it demonstrates that stocks trading at lower valuations and higher profitability tend to outperform those with the opposite characteristics.

Value and Profitability Work Better TogetherValue investing works on its own, without considering profitability. Stocks with low multiples tend to have high discount rates and expected returns. But low multiples alone don’t account for a firm’s future cash flows, so they are at best a crude indicator of future performance. Incorporating profitability provides additional information about a firm’s expected cash flows. Combining valuations and profitability better isolates differences in discount rates across stocks, which should provide a better signal about which stocks should perform well in the future.

Funds that track Standard and Poor’s value indexes, like iShares S&P Small-Cap 600 Value ETF (IJS) or iShares S&P 500 Value ETF (IVE), might also be worth considering. These indexes require new constituents to be profitable to qualify for inclusion. These funds have similar valuations to the Russell 1000 and Russell 2000 Value indexes, respectively, but have noticeably higher profitability. 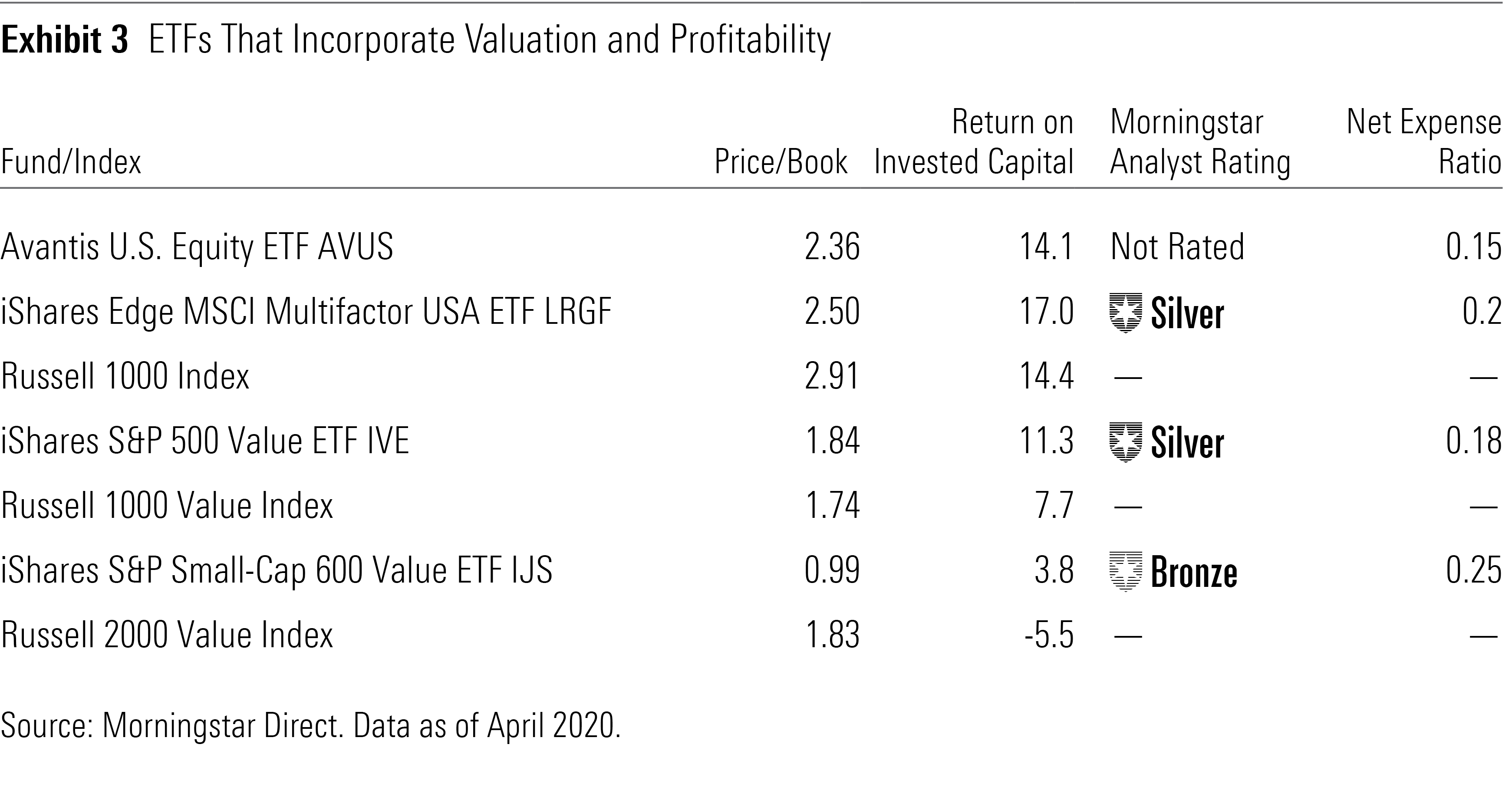